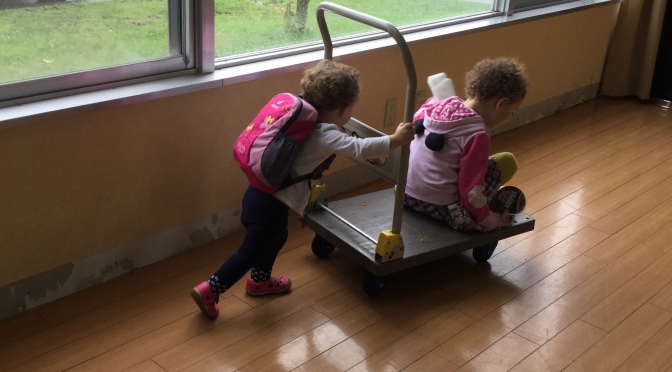 She will stick it in her hair.

That’s the theme of this last week. A calamity of events I’ll say. But you know we did it together and it was AWESOME. Seriously.

My youngest brother is getting married later this month to an amazing lady whom I love. It is important to me that we attend. So naturally four of us, sans George (still on his business trip), piled into a plane and took a quick hop home … ok not so quick. Our first flight was 9 hours. 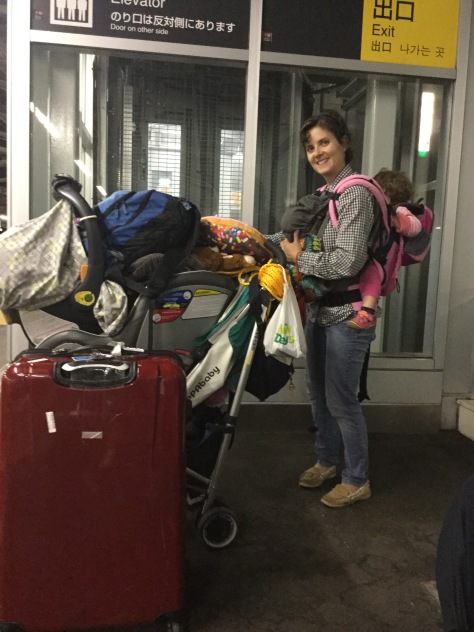 So I thought I’d reflect on flying solo and general travel with three for a minute. Let’s start at leaving our house…Armed with the standard flying luggage…you know my trusty umbrella stroller, two car seats, one large luggage roller bag with clothes to support 40’F to 80’F weather, activity backpacks and the standard infant necessities I marched the crew to the train. According to Google that should take 3 minutes…it took an hour (lugging all that down two flights of concrete stairs is a challenge). Then fast forward two hours on the train where Elle decided she was done with the train…I think the icing on that cake was the final train station didn’t have an elevator and had four flights of concrete stairs. That took another hour and I hurt myself (hip flexors I think) double wearing and carrying that luggage bag.

We had left the day prior to our flight to ensure no last minute awesomeness. When we arrived at the hotel in high spirits (at 1 am…Hahahaha) our elation was somewhat crumpled when our flight out was cancelled. Okay…so naturally the next day we walked to the local library in the rain because it would rain all day…and enjoyed a good read. That walk to and from the library was full of Sweetpea chatter….jokes, realizations and lessons she needed to teach me, advice on life, and the ever reassurance that I’m a strong Mom and that I can do this. As we traipsed back to our hotel, the moments were not lost on me. I felt I had the biggest smile and warmest heart. What a beautiful moment in time. I will treasure this. 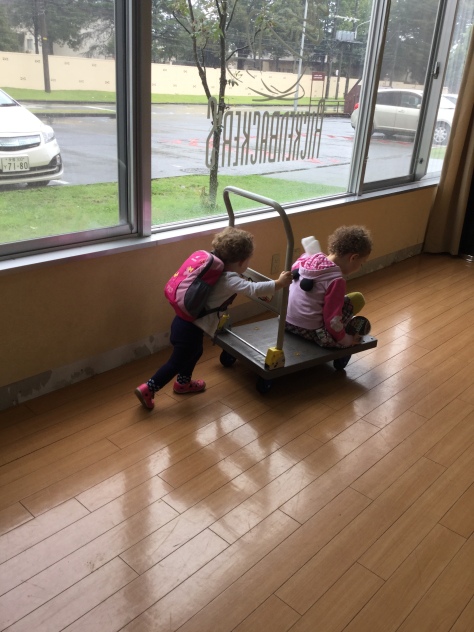 Ok yes another fun fact about travel is sometimes little ladies get a little bit uneasy about new places to sleep. I celebrated the hotel when I saw the pack and play but quickly realized no one, including Gigi, wanted anything to do with it. So I found it immensely entertaining that to fit all four of us in a double (full? I don’t know whatever is one size down from a queen) we all had to sleep cross wise on the bed. I’m just glad that all 5’3” ish of me is around the width of that mattress. The room was the last room available (and in shuttle range of the air terminal)…Elle felt so special snuggled right next to me…except this lovely little lady felt the need to name and point out each body part she knew on all sleeping people: Toe!!!!! Nooooooo (nose)!!!!! Ear!!!!! Her enthusiasm was precious and punctuated with giggles and laughter with Sweetpea. At first, I was irritated and then listened to them and hoped those precious sounds are something I will always remember. 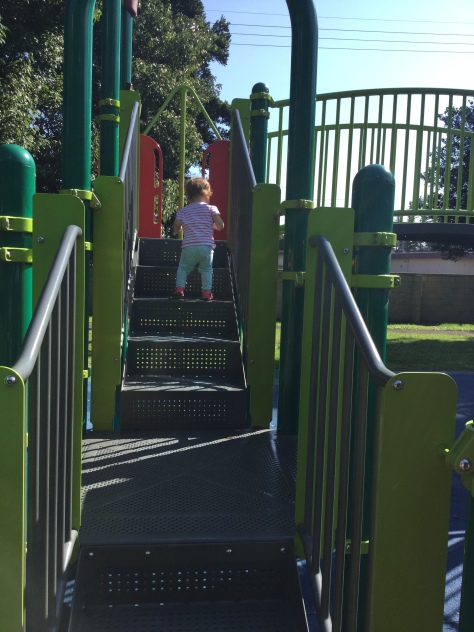 To be honest, I chose a military flight (Space A) for our first adventure because mistakes are bound to happen ie how does one get on or off an airplane with capable four yr old, an infant, a toddler who runs and two car seats (yup…no idea…just realizing that one)…I didn’t think that one through. Not to assume my military sisters and brothers aide….but I did and I will pay the amazing support forward.

So some of the fun:
1. You know with three someone oftentimes needs something. There is hardly a dull moment. BUT….after three hours of Elle’s frustration (the standard crying, yelling, screaming, anger with brief lulls as toys and her gracious neighbor temporarily distracted her) at being in her car seat…she passed out.
2. Right when Elle passed out…Gigi woke up. BUT with three hours til landing — Gigi fell asleep.
3. Right when Gigi fell asleep, Sweetpea had her first melt down on this plane…the warming eye mask I’d brought with us was too hot for her and didn’t fit her head. So a lullaby later, snuggled in an airplane blanket, she fell asleep.
4. I promptly fell asleep…Elle and Gigi in their car seats and Sweetpea…well she had two seats by the window by herself and was now fast asleep with her legs shooting into the isle.
5. I do not think the four of us can fit in the airplane bathroom. Thankfully I had car seats to secure kids in…not sure how I feel about leaving kids for restroom breaks. I’m really not such the fan.
6. Lollipops were genius for take off/landing until I saw Elle matte it in her hair.
7. New toys were great time passers….Sweetpea informed me that her next fidget spinner …well she wants one to light up one “like Cyrus”…her preschool buddy. Peer pressure starts so young…as does consumerism!
8. Filling out customs forms is simply hilarious. “On this flight the flight attendant does not have a pen so please borrow from your neighbor.” That’s funny…or not. Because seriously where did I pack the pen….
9. I was so thankful for some of the games on my tv monitor…that blackjack game kept my brain awake. I just don’t like the idea of falling asleep while holding Gigi. I should be fine but that “should” factor has many endings some of which I want nothing to do with…that’s a horrid thought.

2 thoughts on “If You Give a Toddler a Lollipop”